In honor of a new Punch-Out!! game being released on the Wii, (which I happily report I've purchased and am a fan of) I thought I'd review the NES classic version. It's worth noting that the US release of Punch-out!! on the NES comes in two flavors, Mike Tyson's Punch-out!! and Punch-Out!! featuring Mr. Dream. This review covers the earlier version and the one most people, myself included, are the most familiar with, Mike Tyson's Punch-out!! 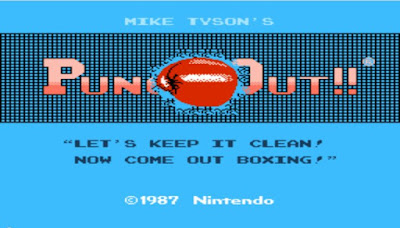 Punch-out!! is another entry on the long list of vintage games that take less than 1 hour of straight gameplay to beat yet ate the majority of your childhood and adolescence with it's pixelated evil.

It has a fairly simple premise, you fight the boxers in three brackets, minor, major and world, beat them and move on. Like all games it's fairly easy at first and ramps up the difficulty as you progress.There are 14 bouts total, assuming you don't lose. When you lose a match you either rematch or you get down ranked and have to fight the previous fighter before getting your rematch, if you lose three times, Little Mac retires and your game is over. Each bout consists of no more than 3 rounds lasting "3 minutes" (it says 3 minutes, but the counter is definitely NOT real time) in that time you have to knock out your opponent or knock them down three times in one round for a TKO. If you don't knock you opponent out or get knocked out at the end of 3 rounds a winner is chosen by decision. Sometimes a decision can be your best friend, but be aware that with some boxers you CAN NOT win by decision no matter how well you did in the fight. 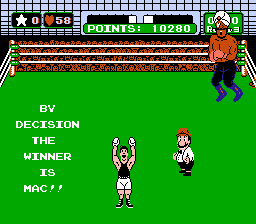 Controls for this, like most early NES games are pretty simple. Use the D-pad to move left and right and to block and duck. The A and B buttons are left and right punches, just the buttons for body blows and the buttons plus up for hooks. You mash both buttons to get Mac of the mat if you get knocked done. Use the start button to start rounds and use your star punches. Use select to get an energy boost from doc between rounds, unfortunately this technique can only be used once per bout and is very inconsistent. You rejoice when your bar returns to full and curse doc and his useless encouragement when you only get a small sliver back. It's also worth noting that using select when you have a full health bar causes it to decrease. Overall the controls are easy to use and responsive especially for a game this early on in Nintendo life.Which is a good thing as timing and quick reflexes are vital to playing Punch-Out!! I'd suggest thoroughly checking your controller prior to loading this in your NES (Sure,you CAN play it via emulator but, you know it's not the same) because if you've got a sticky or unresponsive button, you're not going to get very far. 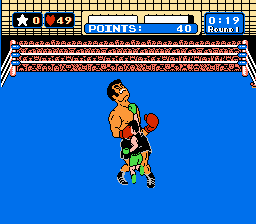 The music is great in the way most classic NES titles were it's repetitive, catchy and completely awesome. In fact as a child, I loved the biking screen music so much that I made up words, none of which were very flattering to poor doc and his immense girth perch atop the bike...*ahem*
If the Rocky series had a soundtrack composed entirely of a limited range of 8-bit sounds, it would sound like this only less epic.


The graphics while not fantastic are actually pretty good for the NES days. The crowd in the background actually moves during a fight, the larger than life fighters have a wide variety of expressions and animations, and the title screen features "3d" boxing glove punching through it, which is probably the best animations in any NES game of the time. 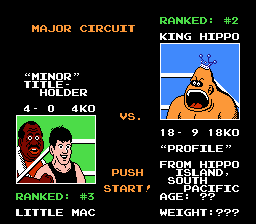 You take on the role of Little Mac, 17 year old Boxing Phenom from Bronx, NY in his quest to become the WVBA world champion. Helping him along the way is Doc Louis, his long time trainer who we see during round breaks(and the infamous biking animation) and he takes these moment of downtime to talk to Mac. Sometimes he says something almost useful: "Dodge his punch, then counter punch" but mostly it's just moral support: "Hang in there Mac!" or shameless self promotion :"Join the Nintendo fun club today mac!"


Mac's Opponents are 11 of the WVBA's finest heavyweight fighters: 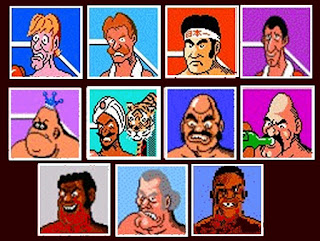 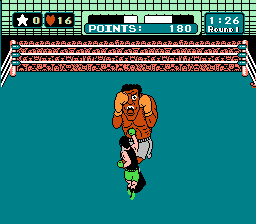 Mac has to get through all of them to become the champion. Though looking at them in comparison to Little Mac you kind of have to wonder about the WVBA's rules, how exactly can Mac possibly in the same class with boxers twice his height and weight? Also is there a clause in the contracts about maintaining a borderline offensive cultural caricature appearance? Though teasing aside these guys might look ridiculous, especially when you give them a good punch to the gut, but you soon realize that doesn't keep most of them for beating the crap out of Mac laughing at him and your self-esteem as you frantically try to get off the mat.


Just in case you had any doubts about who made the game and which console it's for, Mario is your referee. Because if years of Nintendo marketing have taught us anything it's that he is qualified for any and all professions. Though as Ref Mario is pretty ineffectual, he pretty much ignores whatever happens in the fight, including several moves I'm sure can't be considered legal, and only waddles on to the screen to say fight, TKO and do the countdown whenever someone hits the mat.

Given the amount of rounds, and assuming you played them all for the full duration, in theory you should be able to beat this game in less than 2 hours. However, Like all those early 8-bit classics, if you're not in practice, that's not going to happen. 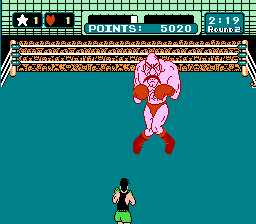 When I started out writing this review I thought it was a good time to reacquaint myself with the game. Sure I'd spent hours playing it when I was younger, but it's been quite awhile since I'd been willing to take sort of punishment. My old knowledge of each boxer's tells and tricks let me sail through the minor circuit and most of the major circuit, Bald Bull was a bit of an issue, but I made it through with a spotless win record until I hit Soda Popinski. Then came the awful crushing sort of defeat I remember from childhood. Like everyone (outside Mike Tyson, who's just ridiculous), he's got a system you have to follow to success. I did it eventually, but even knowing exactly what to do, his speed, power and ability to dodge star punches (after the first 2) meant I had to restart more times than I feel comfortable saying.

But really, that experience sums up how the entire game works, each boxer has a specific routine you need to learn to avoid getting pummeled and to earn their defeat. If you're thinking that I just suck and set routines are bound to make the game easy, think again. Knowing what you need to do and being able to follow through are two very different things. In many cases, especially once you hit the world circuit, if your timing is even a split second off you're completely screwed. Look up whatever cheats, FAQ's or YouTube Videos you want, if you haven't been practicing, Little Mac is going to hit the mat quite a few times. 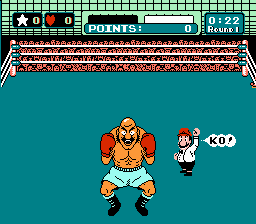 That being said given enough time, you can master this game, but it's going to take a while, getting through the world circuit is quite a challenge in itself even when you know what's coming, but the final bout with Tyson is in a league of it's own. Just ask the vintage gamers you know if any of them have ever beat Mike Tyson (without the use of cheats or save states), if you know some really hardcore gamers you might get a single yes. Beating Tyson ranks up there with completing Zelda II and Friday the Thirteenth on the "Big List of NES gaming/life achievements", we all know it's possible, but few have the drive and patience to get it done.

In closing, I think every retro gamer should play punch-out!! It's got a perfect mix of difficulty, playability, absurdity and fun to keep you hooked for a lifetime. Twenty years later, fans are still playing this game and are cheering for it's sequels, it has well earned it's place in the Pantheon of NES classics.

Don't forget to stop by our shop for vintage gaming collectibles: