Thia Halloween instead of candy, we're gonna to give you the Top Ten Horror Video Games. Clearly this list is very subjective but we'll do our best to explain our reasoning.

10: Friday the Thirteenth on the NES. Most people think of this title as the terrible epitome of LJN's game making career. However there's actually some genuine 8-bit terror going on here. The music is excellent, with the cabin theme taking the cake for some of the eeriest video game music of the 8bit era and the music when you encounter Jason is the perfect NES counterpoint to classic killer themes. The real terror though, comes when you make your way to one of the surprisingly labyrinthine cabins never knowing where exactly Jason going to pop up until BAM! he's on your screen.

See the rest after the break

It's October 30th so it's quite and understatement to say we're a little behind on doing Halloween themed posts, but I've got a good one today: Some super vintage Mario and Zelda II Halloween decorations. We spotted these on auction a few weeks ago and HAD to have them. 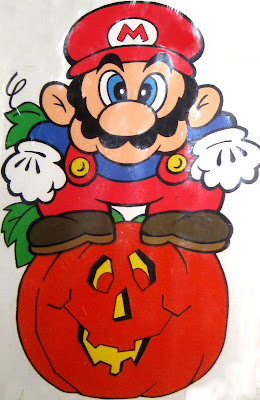 This is an official set from 1989 with the official Nintendo seal of quality so you know you're getting only the finest crack approved by Nintendo. They're flocked too so you can finally fulfill your fantasies of stroking Mario's Velvet-Soft Pumpkin.

First up the Mario 2 side: 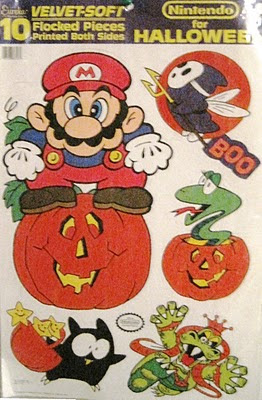 I'm a little disappointed that it's clearly just the same art we always see from Mario 2 merchandise stuck in with some Halloween themed stuff instead of new art. However, that being said Mario + Halloween=Happy Nerd , so I'm still thrilled with the concept enough that it's OK that it's old art.

Naturally there are some things I'm not as OK, like why doesn't even freaking Nintendo know that Bowser wasn't in Mario 2? 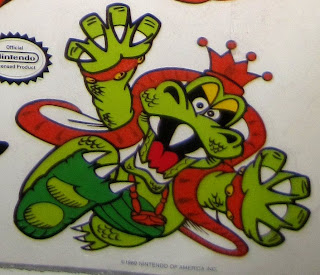 Dressing up Bowser like Wart does not make him Wart nor does it mean he was in the game. Wart was a frog if you played the game you know this, if you've forgotten here he is for reference: 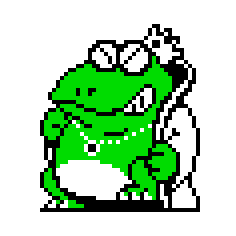 Note how that's a frog and not the demon lizard turtle we've all come to love. The Bowser in Warts clothing problem plagued a lot of the merchandise from this period possibly due to Nintendo of America's inablity to make a frog character look like a frog instead of various other green creatures, but that's a long rant best left for another time.

Moving to more positive things, my favorite part is The Ninji with his little basket full of stars. 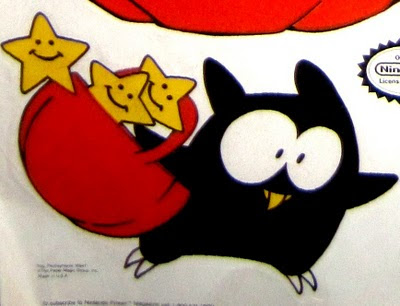 I never got stars for Halloween, but maybe it's because I never dressed as a Ninjii. I'll work on that for next year.

Next up the Zelda side: 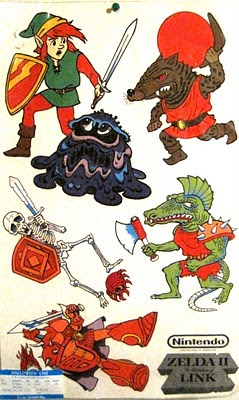 As you can probably tell from many of my previous posts. I LOVE the Zelda series, I'm a little fanatical about it honestly. So I was even more excited about getting Zelda Halloween decorations than I was the Mario ones. That being said they're kind of a disappointment. They just used straight up Zelda art here they didn't even bother trying to incorporate random Halloween stuff. No I'm not saying that Stalfos aren't a creepy skeletons or that it's isn't an impressively rabid evil Goya. 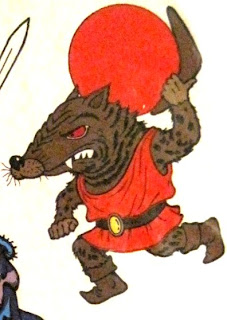 But c'mon would it have been so hard to put Link in a pumpkin for me? Really?  Also not that I'm sad it's there, but is the Zelda II logo/title really an appropriate Halloween decoration? What's that supposed to say to the trick-or-treaters? Don't bother stopping here, the occupant is too engrossed in Zelda to care about candy? I can't see that there's really one highlight to this set, they're all great and full of Zelda-y goodness. Though if there's one thing I must point out it's that Link's tights are flocked which naturally just invites stroking, our set of decorations is sealed so I can't partake. However, I'm sure somewhere there's some fanfic which will allow me to live vicariously.

Mostly though this set just makes me wish that Nintendo still made decorations so we could happily display these for a festive mood rather fiercely keep them in the original packing intact like the nerds we are.

Be sure to stop by our shop:

Just last week we got a box containing several months months worth of stuff purchased from Japanese auctions. There were lots of interesting things in it like some hand drawn shikishi and new cels. But what I was the most excited about was a bunch of cool Japanese Legend of Zelda items. Zelda was one of my earliest video game loves and while Mario is better represented in our collections (mostly due to availability) but the legend of Zelda is my favorite series of games so I'm always excited to add new things to my collection. So here's what I got: 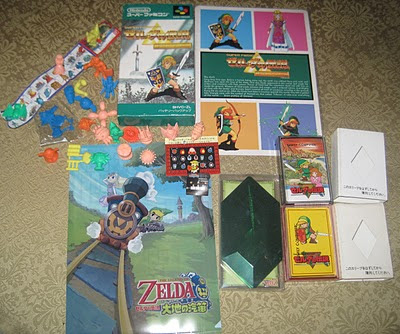 Look at all that sweet wonderful Zelda loot. I was a very very happy fangirl the day all this stuff came in. Items in details after the jump