As a long time Contra fan, finding out it could be made portable for me was quite exciting news. And unlike the disappointing Gameboy port of Contra III, the MOSTLY original Gameboy title Operation C proved to be a fun and compact Contra experience, exhibiting both familiar features and charming little new ones. With pleasure, I now wish to share it with the rest of the gaming world who may be unaware of its very existence. 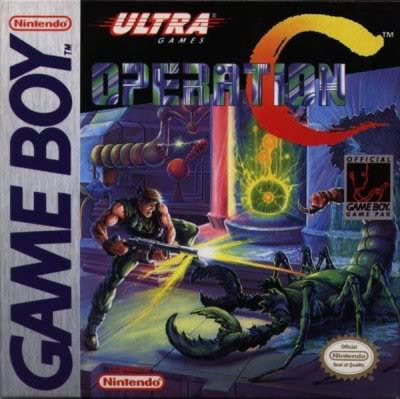 The basic idea of the game remains the same as the good old days (Not that this game could be considered new...). Run the side-scrolling course of the level, and if it moves, shoot it. And if it doesn't...try anyway. At the end of each level you will face a boss. Destroy it, and you will move on to the next area.

Graphically it is quite an impressive piece of work considering it is an early Gameboy game. There is an animation for aiming forward, upward, and in all diagonal directions (Shooting downward in normal levels is only possible when doing so during a spin jump). Enemy sprites are rather detailed and mostly easy to distinguish the identity of. Backgrounds aren't too terribly detailed in come areas but are still pretty good in others. The game is colorless played on a normal gameboy, and on a Gameboy Color or Gameboy Advance it is very basically colored. 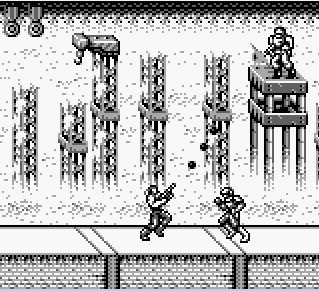 Operation C's controls are responsive and easy to get the hang of. Their simplicity remains the same as the Nintendo originals. You jump with A and shoot with B. Using the Directional buttons is what aims, and you can aim in eight different directions. If you are used to the classic Contra games, you will certainly notice the lack of speed your character boasts, most likely in an effort of stretch out the course of the 5-level game. Along with low speed, your character's jumping is far from impressive, making several jumps in this game quite nerve-racking situations. These are the only real issues with controls.

The sounds are rather complex for a Gameboy game. A lot sounds for games of this period were basically a series of "thuds" and what not. This one however has nice, large explosion sounds, the sounds of motors in attack vehicles, the high-pitched bullet-ricochet sound indicating a hit target, a notably nice machine-gun sound effect, and many other distinct sounds.

Not only is the music none-too-repetitive, but if you're a Contra fan, you should find it familiar. All the levels play Gameboy-modified versions of the music heard in the original classic. This is with exception to Area 2, which seems to exhibit an original but energetic musical composition. Additionally, the music that plays during Boss battles is a modified version of the great music that played during the Base Boss battles of the first Contra.
-Your Operation C Experience-

The gameplay of Operation C is quite easy compared to the classic Contra and Super C games. This in mind, it is still a Contra game, and should not be taken
lightly. You are always busy as enemies are constantly running at you from every direction, a common nuisance. Like usual, you also have to destroy gun turrets, tanks, and other machinery, which take multiple shots. This makes the game more interesting, and keeps you a little more off balance. Gunshots coming at you are
reasonably slow which is good as you yourself are rather slow. However, some move very quickly and are very hard to avoid. A different array of battle styles from level to level ensure the
gameplay never gets too stale. 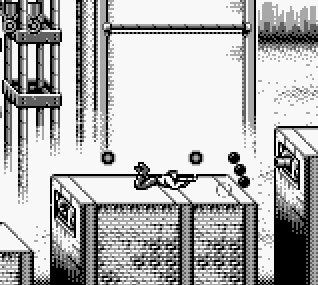 Battle takes place sometimes on flat ground, and other times as you jump from ledge to ledge, or even on rising and lowering elevators. The occasional mini boss or just rather large vehicle make their appearances throughout gameplay and certainly add to excitement and breaking up the usual flow of things. The slightly slower pace of this game doesn't really allow for the death-defying jumps and evasion maneuvers the classic games turned into necessity. This is good or bad, depending on how you look at it. As was said earlier, jumps ARE dramatic only because you can't jump far in Operation: C so getting over certain crevasses takes some thought and timing, but this isn't necessarily a high intensity moment. 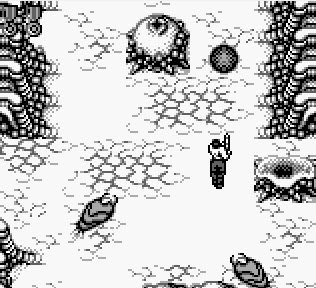 If you're well acquainted with the second Contra installment, Super C, then these levels may seem a bit familiar, as the whole game seems based on it. Respectively, levels 2, 3, and 4 in Operation C bear notable resemblance to Super C's second, third, and sixth area. Also, parts of Op-C's  fifth and final level could be compared to Super C's Area 4. And as these levels were fun in Super C, that tells a good tale for this one's performance. Along with these similar features, the classic Konami way of changing view modes is in effect here as well, so a couple of the stages (two and four) are played in a top-down mode. This limits your maneuverability and evasion tactics to just simply walking in a different direction. You can, however, wander the screen freely in all directions adding more interest to the gameplay. 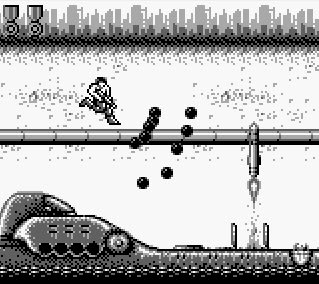 Your boss battles can still prove as epic as those found in the classic games. They are still many, many times the size of your character and are loaded with weaponry. Level 4's boss is especially notable, as its alien qualities and stressful difficulty start to really remind you just what game you are playing. Of course, you can expect the end of a Boss's life to be signified with plenty of explosions and sound. None of the Operation C bosses are exactly what you'd call classic, and aside from Boss 4, aren't terribly memorable, but they still tack on the difficulty and bring a decent enough conclusion to an area. 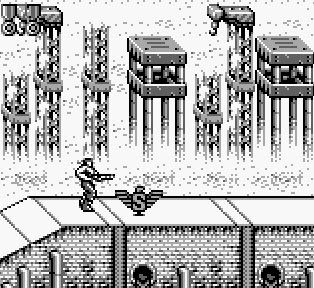 As with the original games, this one allows you to pick up different weapons, each with different abilities and uses. The gun selection is not as plentiful as the other games but it's still enough to make it interesting for you, especially considering how different the weapons that are here are. Along with that, all the guns are now fully automatic, meaning you can just hold the button for continued fire. And of course, the everlasting salvation that is the Spread Shot is present and more alive than ever.

Your default gun has been upgraded to a Machine Gun, which obviously is rather nice. It generally shoots in 5-bullet bursts and has enough speed to be its own best option for some situations.

Heat-Seekers or Homing Rounds are new to this game and are a very useful weapon. Basically, the gun's bullets seek out targets without you having to aim and in addition to that, have a slight Spread-Shot like quality, shooting three at a time.

Fireballs are just as they were in Super C, large balls that disperse into four others when they hit their target. Taking out multiple enemies is made easier with these. However unlike the Super C version of this gun, you can't charge it for a huge blast. 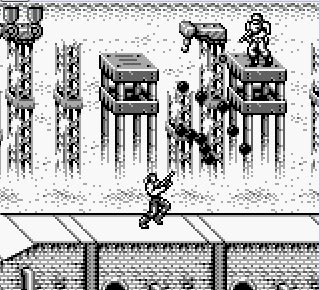 The Spread Shot is amped up in this game and is quite amazing the first time you see it. Interestingly, you have to sort of level it up first. When you first collect the universally beloved S-marked falcon, your Spread Shot shoots in 3-round belts, mildly useful. But if you collect a second Spread Shot while you still have the first, it turns into a nearly unstoppable weapon of Mass Destruction (The kind you're already aware of that doesn't act a cover story for the securement of foreign oil). It shoots the full, big, bad 5-round belts with an added rapid-fire feature that just obliterates all opposition. As it was in the early days, not all the belts are full but the initial few that are tend to take care of any issue that would cause. It's certainly worth your time to see this weapon in action. 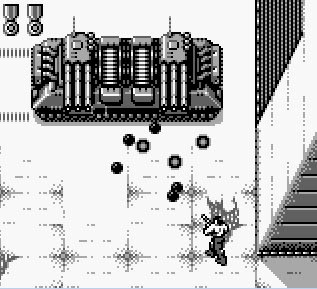 So is portable Contra fun? Why yes it is. All the elements are there, and the difficulty is enough to keep you on edge but not too overbearing, allowing the average Joe to pick it up and enjoy it, something that can't necessarily be said for the original Contra and Super C. The action is a bit slower than its NES predecessors but it's still a pretty fast paced game for an early hand-held. You will still find yourself taking out the triple-barrel tanks, alien pods, and huge bosses just like you love. You get the classic Contra feel with the strange after taste that comes with all Gameboy versions of video games. The downfalls of this game will probably be how slowly you move and how poorly you jump, which accounts for about half of its difficulty. I personally could stand to see this game be a bit longer but I suppose I understand that it's merely a handheld. Now while the first four levels are pretty tame compared to the Contra you are accustomed to but worry not. The final level, five, comes roaring at you in true Contra spirit, with fast guns, dangerous aliens, and plenty of player death. If you wanted Contra, you're getting it now. 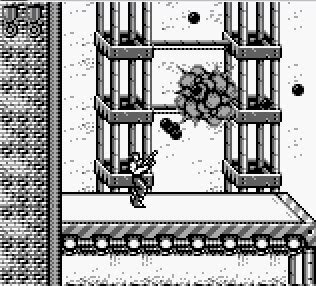 Your Contra experience isn't going to be exactly the same as the classic play through you may be familiar with upon turning on this game. However, as a long time Contra veteran, I can personally vouch for the quality of this game as a hand-held version of possibly the most popular shooter ever crafted. Operation C is sure to be an exciting addition to your hand-held collection and possibly your entire video game collection if you are a Contra fan like I am. It's small, it's different, it's quaint, it's Contra. Pop it into your Gameboy and love it like I do.

Don't forget to stop by our shop for retro gaming collectibles:

Posted by Avane at 10:15 PM No comments: Links to this post