Today's Retro Review is Part II of The Best Contra III Review Ever. Shorter than the last segment, but this part covers Contra III's most well known feature, it's insane difficulty.

So on to Part II: Difficulty, Details and Conclusion.

Contra III - The Alien Wars is a relentless assault on your reflexes, your determination, your devotion, and your self-esteem. Enemies come at you from any which way, firing anything from energy blasts, missiles, lasers, man-sized drills, everything. The classic "Shot in the toe, ya die" principles apply in this game, and have never been more pronounced. Nearly every level is choked with mini-boss after mini-boss, complete with their much-more-difficult-than-the-actual-boss cronies, a law that has reigned over many video game Boss characters throughout the history of time (roughly thirty years). Don't believe anything can get worse than those hours you spent crying over Super Ghouls and Ghosts? Here are some specific examples of the heartlessness that is Contra III. 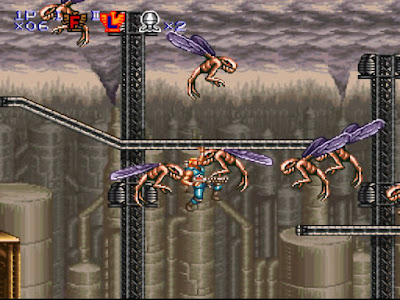 Stage Three First Mini-Boss: As you hang above the oblivion from a high railing, a spiked-mech-pod with rotating arms floats up, revving its giant drill at you, swaying left and right. Unless you have the surface-piercing Fire weapon, you need to grab onto the spinning arms to get a vantage point of the vulnerable area, located underneath the pod. Touch the pod, or more obviously the drill, and an unforgiving death. Once you've defeated the mini-boss, the arms will spin very furiously as the pod goes down, trying to take you with it. You must jump from its arms, back onto the stationary railing, and try to avoid latching onto the arms again (the character does it automatically when he comes into contact with a graspable object). Once the pod has disappeared from view, it will shoot about 5 homing rockets up at you. And you're not even halfway done with this boss yet.

You jump up to a few more rails and then latch onto a wall. Your pod buddy is back, flying back into play, growing two robotic legs and joining you on the wall (he does this whether or not you're on the wall...and you'd better be there if you don't want to die, right then). The Boss with then scale the wall as you climb with it, trying to stay within the confines of the area between its legs as it frequently shoots two rockets at you. When it gets to a certain height, two spiked panels grow out of the wall and the pod latches on, relocating to the far left side of the screen. As you try to, once again, blow thing thing to hell, It tries to line up with you on the wall, and when it's confident that it's got a shot at you, it viciously charges at you, now erecting TWO huge drills, and smashing into the wall, taking your sorry ass with it if you don't get the hell out of its way.


Stage Four: This entire level is the absolute incarnation of what Contra III is about, easily the most notorious part of the game. You spend the majority of the level on a futuristic motor bike, battling what look like flying jet skis, tanks, and a giant, half-mile long flying gunship, attacking you with energy blasts, lasers, fireballs, and its own crew. When you progress past this point (after another mini-boss), a helicopter floats in above you, prompting you to hop onto the missile it is carrying. Once you do this, the helicopter ascends high into the air with nothing between you and the ground but imagination. Some little fruit looking like a medieval warrior with a sword and grapple hook latches onto the missile with you for a mid-air battle. Once you defeat him, the missile is launched - with you on it. Several other regenerating missiles from inexplicable sources come into view. Get acquainted with them...they are now your only means of movement. A large ship comes into view at the right side of the screen. A giant red core is protected by a yellow forcefield, powered by two units on the top and bottom of the ship. You must take out these units as you ride the missles - as they detonate upon contact with the forcefield. If the missile you're riding explodes, you drop. Hope there's a missle underneath you when this happens. Oh, and a swarm of bombs shoot at you from the shielded core as you hop from missile to missile.

But just in case that's just an insult to your Contra abilities, the units powering the shield also shoot at you. Once both power units are destroyed and the shield is down, you can now begin to work on the core. The bombs are now replaced by balls of fire shooting from the core, instantly detonating the missiles they hit. Good luck.

Contra III - The Alien Wars makes the the difficulty of the classic Contra games look like that of Ernie's Magic Shapes & Astro Grover. When you first throw this into your SNES (Or more likely, download it on your WII or click it into your Emulator), you will be killed 7 times before you hit the ground. If you've got the patience, and more importantly, the structural integrity of your controller and console, Contra III - The Alien Wars will prove to be a strange kind of abusive fun, and perhaps in time, your life's greatest accomplishment. So give it your best shot. 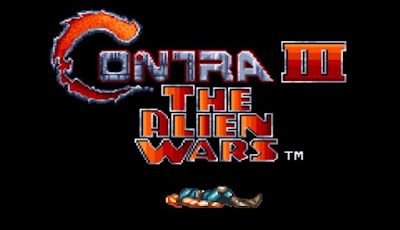 It will never be enough.

That's all for this week's review. Next week's review should be written by yours truly on an as yet to be determined gaming classic. (I should probably start moving my butt on that...)

Don't forget to stop by our shop vintage gaming collectibles: