Looking for an www.Avaneshop.com Coupon Code?

This blog gets a number of hits from coupon code searches. We rarely post them in our blog anymore, but we know everyone likes a good deal. So if you're looking to make your next purchase at www.avaneshop.com a little easier on your wallet, join our mailing list.We send out one email a month with a coupon code good for a few weeks,  a few tidbids about what's been happening at our shop and a few featured items updated in the last month.  Just Click Cornelius the Octopus below to join the list.

For those of you looking for more instant gratification, you also get a coupon code you can use immediately as soon as you sign-up!

There are a lot of Sailor Moon toiletries, toothbrushes, bubble bath, hairbrushes and more. In that illustrious tradition we bring you the Sailor Moon Bath Salts Set: 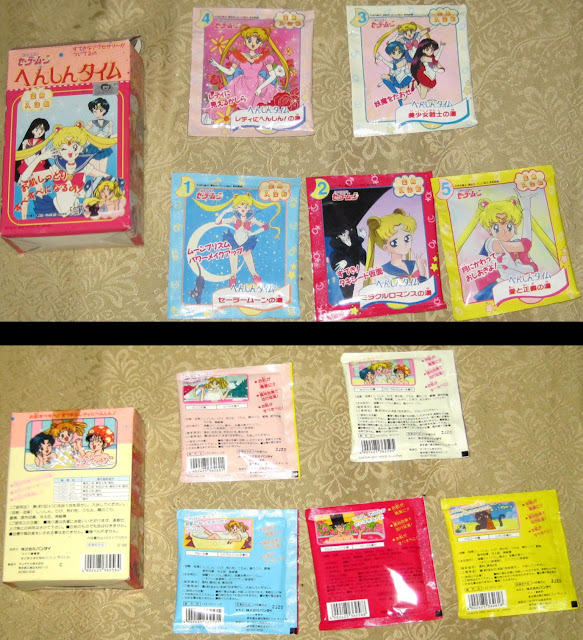 There are actually several sets of Japanese bath salts sets, but this one is our favorite since it has individual packets in their own box and each packet has unique images on the front and the back . The best one by far is Tuxedo Mask who takes his top hat and mask into the tub with him. Though the weird fish in with Luna is also an eyebrow raiser. On the subject of Luna, she must sort of fail at being a cat if she needs bath salts and a bath instead of just grooming herself normally.

We don't read much Japanese so we sadly don't know what scents these are, but we're pretty sure if we were to use these 20 year old bath salts, which we aren't because we don't want to be zombies, but we feel confident we'd end up Sailor fresh and ready to take on evil.

PS We have this same set available in our store right now. If you buy them and decide to open them please let us know what they smell like.  :)

This is one of those things that's odd in it's practically. It's a completely utilitarian useful item made crazy with weird branding. So here is the official Sailor Moon Chibiusa Flu Mask:

This is an officially licensed item from Korea, but seems like it ought to be a bootleg. We have a LOT of crazy Sailor Moon stuff, but this is one of the strangest. Flu Masks are pretty ubiquitous all over Asia during cold and flu season,  but they're usually the white variety or occasionally have a little pattern on them. This one lets you have all the Princess Chibiusa in the middle of your face which is a little weird. It's a child sized mask, a very small child sized mask, so we can't just put it on and show you how strange looking it is.

On the upside it's got a princess Chibiusa on it and there aren't many items which feature her. It's pretty unique too, we've only seen 3 of these. It's probably a good thing though a sea of these things would be creepy.

As we've noted before we generally don't deal with bootleg items, but every so often one is just so amusing or so out there we have no choice but to not only pick it up, but to share it as well. So here we have a lovely Sailor Moon "Tea Set"

It's hard to even know to where to begin with this thing. I guess I'll just start at the top. We have Sailor Moon and Sailor Chibimoon, who seem to be engaging in some underage drinking. Chibiusa clearly can not hold her liquor, if her dribbles down the front of the package are any indication. They could concievably be drinking something non alcholic, but most of us don't drink juice out of champagne flutes.

Next to our smiling inebriated Sailor Senshi we have the Official title of this item "Fun Tea Play Set." Now before I even start to point out the inaccuracies with that title, I have to wonder what sort of tea they have that's fun. I've had A LOT of tea, there are roughly 20 varieties of tea in our pantry just right now and none of them are fun. Tea can be delicious, it can be warm, it can be rich and it can even be complex, but it isn't fun.  There aren't too many people having wild tea parties. You have tea parties so you can dress up and eat little cakes, and they're fun in their own way, but it has little to do with the tea itself.

Moving on, this is a set of wine goblets, 2 forks, 2 spoons, and 2 plates, which is certainly a food serving set, but it's far from a tea set.  I mean you could maybe put cookies and cucumber sandwiches on your plates, though they're a little large for that, but tea doesn't go in goblets. That's just a non negotiable fact, if they were  the cut glass they're supposed to resemble and you put hot tea in it, unless you're having a tea part in a dimension where the laws of thermodynamics cease to apply, you're going to have a hot if not scalded hand.

So finally we've worked our way to the bottom of the package where over in the corner (though it's hard to see in pictures because it's under the packaging bubble) for reason that will never be clear, Santa Claus and 2 Reindeer are shown having a picnic...seriously. It's the big incomprehensible cherry on this crack item sundae.

Even for a bootleg this might be one of the most illogical sailor moon items ever even in the face of things such as the car pencil box and the Jupiter mini skateboard water game. So on one item we have underage drinking, FUN tea, a scalded hand and Santa Claus. It's glorious in it's own horrible way.