Syberia is 20 years old now but pretty much as soon as it was released it was considered an instead classic.

American lawyer, Kate Walker goes to France to sign some paperwork giving a large client control of an old toy factory. When she arrives she discovers a town full of strange but beautifully intricate automatons and a half century old secret. Suddenly a one day trip to take care of a few formalities becomes a life changing adventure aboard a clockwork train  heading for the fabled island of Syberia. 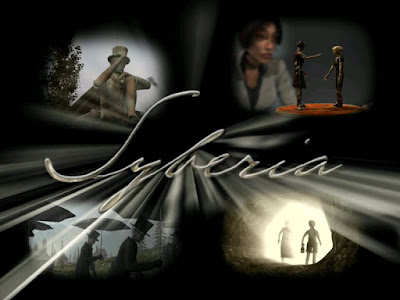 Controls aren't bad, it's a point and click so there's not a whole lot of guessing or wondering how something is done. However Kate can be kind of sluggish sometimes, watching her take the stairs was particularly annoying for me but did make me nostalgic for those old PS1 adventures games that suffered the same issue. Additionally looking for the right sweet spot to make something work or pick up a necessary item got tiresome sometimes, but nothing any adventure game player shouldn't be very familiar with. 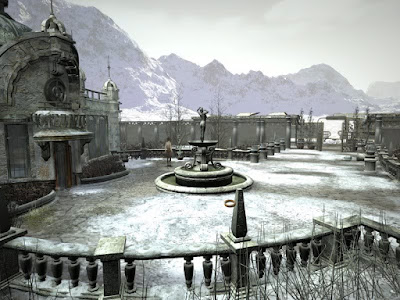 Graphically it's nice overall. The character designs are pretty consistent with the time period though their movements themselves are bit stiff. The environments are imaginative and beautifully rendered with gorgeous art-nouveau and steampunk styling throughout, even the menu is pretty. My small issue is while they're lovely, the environments are pretty flat there's usually not a lot of background activity happening and you usually only see everything from one angle.


Soundwise it's good, but not phenomenal. It's got full voice-overs which normally in a game of this type I could take or leave, but other than a few
botched accents the voice actors were very believable.The only issue there was that it was the voices were often delayed, making many conversations awkward sounding especially when one character broke into another's speech or was supposed to be startling. 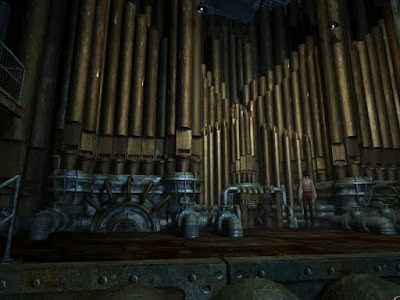 The music, was well written and appropriate, but I had a problem with it's usage. Every single time you accomplished a task like turning something on or putting something together, you got a big swell of music. Which was ok the first time and maybe even the 10th time, but after that I was completely over it. It drowned out any background noise or conversation for those couple of minutes you were stuck listening to it. It at least had the decency change depending on your area, but it still got old quickly, which honestly is kind of a shame because the music was otherwise a high point.

As a point and click style adventure, your primary means of going through the game is talking to NPCs, finding important documents, finding random objects, using said random object with information obtained from NPCs and documents to complete a task and move on with your game. Simple classic stuff here, not too much different from the sort of things we were playing back in the eighties (King's Quest anyone?) it just looks nicer. 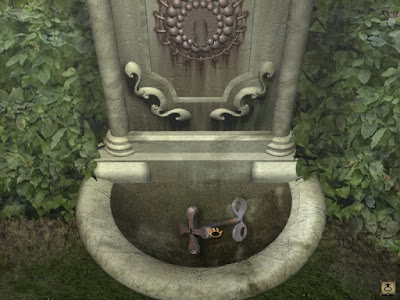 The exploration leaves a bit to be desired. The locations are lovely and pretty well realized, but as I noted above they're a bit flat. Most places you can only see from one angle and there isn't really a lot of room to wander around. You're always on a main path that will take you to a puzzle or objective, sightseeing off the beaten path isn't an option. Additionally, Kate often wouldn't speak to NPCs that weren't absolutely necessary, or examine and comment on her environment unless it was relevant to the story right then. This sort of thing is a huge pet peeve of mine in any adventure game, as I feel extraneous environmental details, while unimportant to storyline, add to the depth and overall feel of a game. I will say however, that in some ways this detraction is also a blessing in some ways. As I mentioned briefly above, Kate walks painfully slowly even when running. I often found myself dreading any backtracking I had to do, so having full run of the land might not be so great. On the other hand, I'm playing an adventure game because I want an adventure I can feel connected to and immersed in, not a carnival haunted house style experience on rails. 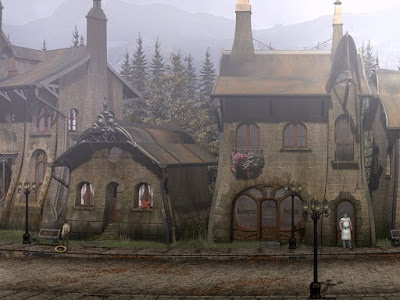 I can't discuss the puzzles in any detail without ruining things, but they're pretty easy for a veteran gamer, not so easy they insult your intelligence though. Even if you're not an experienced game adventurer, they're not so hard you find yourself wanting to send the programmers some less than complementary emails. Most solutions are either discussed somewhere or by someone or are pretty logical once you have all the required items. I only found a few places where I got stuck because the next course of action wasn't exactly logical or ever discussed, but not really anything out of the ordinary for this type of game. 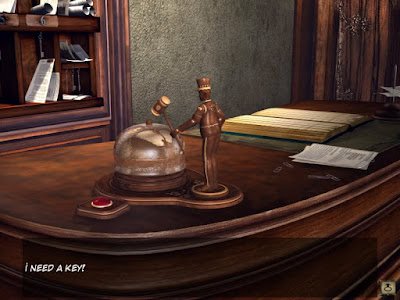 The storyline is interesting and compelling, Kate spends most of the game trying to track down the mysterious heir, master automaton maker and mammoth obsessee, Hans Voralburg. Tracking Hans is no easy task as by all accounts no one has seen him for years, and some think him long dead. Her only clues are his now dead sister's notes and some of Hans' creations including a clockwork train, and Oscar the amazing automaton train conductor who's AI tends toward the neurotic with special attention paid to needless bureaucracy. The two of them encounter a large cast of colorful NPCs ranging from a hotel clerks and barge captains to a drunken astronaut and a world famous opera singer. Most of the NPC are pretty fleshed out as well with refreshingly non-archetypal personalities. Even the locations themselves have interesting and complex histories for Katie to learn about. 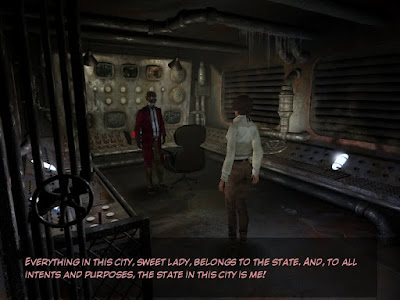 Kate Walker's own personality comes through surprisingly natural character development. You learn about Kate's life via a series of cell phone conversations with her mother, best friend, fiancee, and boss. A nice change from the normal "my name is ___ and here's my life story" randomly blurted out in a cutscene found in many lesser quality games. By the end of the game I found myself thinking of Kate not quite as friend, but still fondly and familiarly, like an old high school acquaintance I would like to catch up with over coffee. 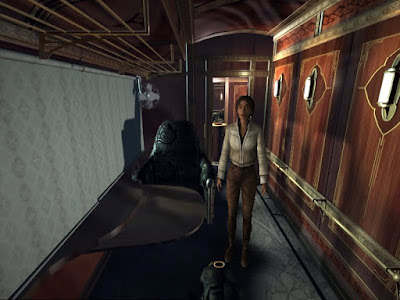 They only issue with the storyline is the ending. Without ruining any details, it's abrupt, anti-climatic and clearly a lead-in to a sequel. Personally I can't stand it when game publishers (or movie makers, or novel writers) do that instead of giving you a real ending, there are ways of both giving your story and end that won't make your players feel like they wasted hours for nothing and still leave your options open for a sequel. I didn't necessarily feel like I wasted my time at the end of Syberia, but I did feel a bit cheated. 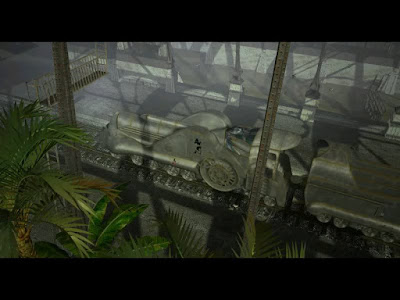 Syberia is a good game, it's got a nice classic feel and a unique, compelling storyline. Visually it's treat, every single object, environment and menu has been carefully and artfully designed and well rendered especially for the time period. The game isn't without it's flaws, as discussed above, but the positives outweigh them. So, if you've got a few hours to spare and are looking for a unique adventure Syberia won't disappoint.

Posted by Avane at 2:00 PM No comments: Links to this post

Our collection of weird Sailor Moon items isn't just limited to officially licensed crack, we have a wide variety of unofficial items as well. Now finding a crack bootleg item is like shooting fish in a barrel, but we try to get some of crackest of the crack items. That being said we present you with one of the worst offenders, A Car Shaped Pencil Box: 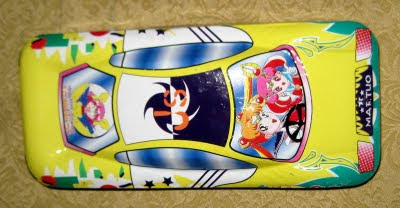 Who knew that Sailor Moon and Sailor Chibimoon rode around in such a flashy car? Though admittedly Usagi won't be driving it for much longer if she doesn't put more than one posing finger on the wheel. Stranger still who knew they hung out with other magical girls like Momoko from wedding peach? Though even though she looks like she's smiling in the back window, something much more sinister may be going on..

Instead of having a normal hood, this car is so fancy the whole top comes up for extra easy access, snazzy! 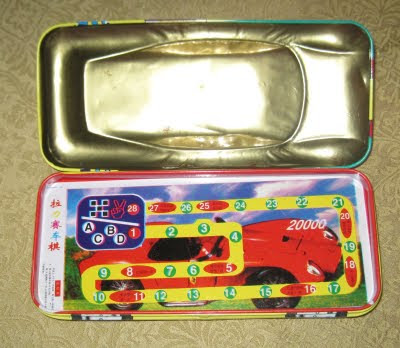 You've got to wonder how exactly they're getting around. I'm really not a car person, but I've seen a variety of engines none of which seem to resemble an unplayable race themed board game. On the plus side it seems like a pretty unique green environmentally friendly solution, a moon princess has to be socially conscious after all.

In all reality, this a tin pencil box with a hinged lid and single inner tray, it probably would hold your pencil, but wouldn't hold up to much wear and tear. We bought it online (for around $5 including shipping) but it almost certainly came out of some back alley Chinatown dollar store. However, in spite of it's many flaws and inaccuracies, this is a fun and unique piece for our collection and will serve us well holding wands, time keys and doll stands.

Don't forget to stop by our shop for unique Sailor Moon toys for sale: