Even when you've been collecting Sailor Moon for a long time, like say 14 years or so, you can still be consistently amazed with the weird stuff they made for the series, like this:


The official Sailor Moon lint roller. It's hard to see but the Toei Seal is on it, so it's an officially licensed Japanese crack product. Tired of that pesky Luna Hair mussing up your Sailor fuku? Or perhaps Artemis has been laying on your School uniform? No problem Sailor Moon has got you covered. It's collapsible and purse sized too so in case one of those pesky Lemures that terrorized the SuperS season left a stray hair or some unidentified fuzz, you can still look fabulous.

Seriously though, this is some pretty lazy item integration, the only thing that really makes it Sailor Moon related is that cheap looking sparkly sticker on the front. The could have at least screen printed a logo on it or something. Though I suppose I was going to make something so gloriously random to hope it boosted sales, I probably wouldn't try that hard either.

We've never seen another one of these, so it's probably fairly rare. However, it's one of those things that proves that rare doesn't always mean desirable. Sure we like it for how ridiculous it is, but I can't imagine too many people feel this represents a Must-Have piece for their collection.

Unlike may of the collection oddities we feature, this item is actually pretty reasonable in theory. Little girls were the primary audience of Sailor Moon and are generally the largest consumers of cheap waxy make-up.  So combing the two into one product made a lot of sense, thus came the Sailor Moon Make up Compact:

Sure Sailor moon poorly molded plastic face is staring at you with soulless dead eyes, but hey at least you know it's her. She even has pretty much the right details. A compact based on the compact she has in the show would be a lot cooler, but hey this is better than just a logo sticker at least. So at this point it still seems like a pretty reasonable item. Then we open it:

Once open you've got a little mirror and cleverly designed celestial themed try holding science experiments involving mold and bacteria lip and cheek color. To be fair, this item is at least 16 years old so some of the colors have definitely changed with time, but I can't say that any of these colors would have been a particularly good choice to begin with saving for that magenta at the bottom, which still isn't great but is at least sort of a wearable lip color. Oh but wait according the handy chart on the back:

Magenta is a blush color, lip colors should be limited to yellow, orange and beige...which frankly confirms my suspicion that even before they'd been exposed to 16 years of color changes these colors shouldn't have been on anyone's face ever.  Also, if you note the instructions it says to put this stuff on with your finger, which can be a fine way to apply make up but not such a good idea for girls ages 4 and up, unless you happen to want multi-colored fingerprints all over everything.

So basically this thing is a little creepy but fine of you never open, just sort of upsetting if you do open it. Luckily for us we have very little reason to open the lid, so we can still happily display it in our collection.

Back in the hey day of point and click games Sierra was king. They brought notable series such as Police Quest, Leisure Suit Larry, and King’s Quest to gamers everywhere. I, sadly, was not able to play the series from the beginning due to a lack of a computer with good enough specs to run it and I was a bit too young. I started with the fourth installment in the King Quest series, The Perils of Rosella, which quickly became one of my favorite PC games of all time. 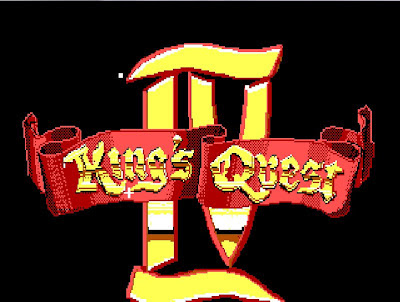 The basic story is that King Graham, the protagonist of the previous three King's Quest games, lies dying. Princess Rosella, his daughter  feels incredibly sad and gets sucked into a mirror which pulls her into another world. In this strange world you can find a fruit that will save your father, good thing you go sucked through that mirror huh?  However the fairy that brought you here through the mirror is ALSO dying. So you're going to have try and save her too, otherwise you will never get back to your world.  Stupid fairy.

Sailor Moon was massively popular all around the world and as a result there are some country exclusive items that were made in smaller numbers than any of the US or Japanese merchandise. Germany's Igel company released quite a lot of this small run, unique merchandise including dolls, plushies, figures and some other weird things.

This is somewhere between figure and weird thing: 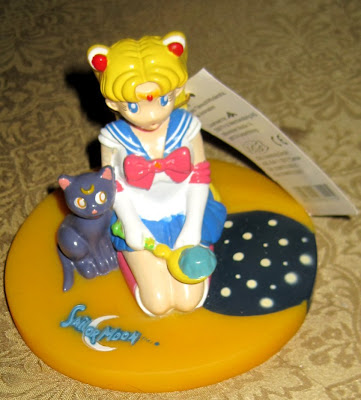 When we bought this we had no idea it was a squeaky toy we just thought it was a cute concept, kneeling moon and inquisitive Luna on a crescent moon base. When it arrived from Germany, we found it was made of soft squishy rubber instead of PVC plastic like we were expecting. Strange sure, but we were more interested in how it unfortunately seemed to have been painted by a very talented factory working who under normal circumstances would have made a beautiful figure, but was drunk while detailing ours. Naturally the not-so-stellar paint job was disappointing, but  it's nothing too odd in Sailor Moon collecting.

At some point we flipped the figure over and found the oddity. We noticed that there was a little hole in the bottom. A little hole that looks suspiciously like the holes in the bottom of our dog's squeaky toys. After a brief moment of disbelief at the concept we gave it a little squeeze...

This left us both amused and dumbfounded. It's not like they just made a toy out of rubber and it happened to squeak as a result, there is a squeaker in it. Meaning at some point while this was being conceived there was a conscious decision made to enable a Sailor moon figure to squeak. Leaving us left to ponder for what or for whom is this item intended?  Is it a Sailor Moon toy for your dog?  For your Baby? Or did Igel just believe that Sailor Moon Fans everywhere were yearning to make squeaky noises? We thought perhaps the tag might give us a little insight into this mystery of who this toy was intended for, but what we found wasn't helpful. 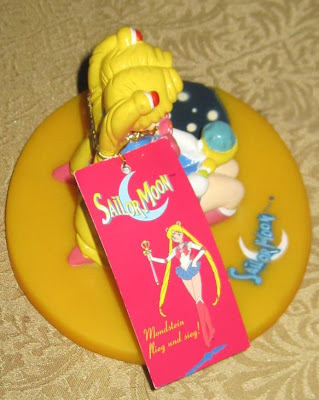 The image might be kind of hard to read, but it says:

Which if you don't know German Translates to "Moonstone fly and victorious" at least according to both types of translation software we used on it. Which doesn't clear up any questions as to why there's a Sailor Moon Squeaky toy, but does present a host of new question regarding that Slogan. (In case you're curious the back side of the tag just has copyright information which is strangely in English). I suspect the slogan is probably just something that doesn't translate well, but we are looking at a Squeaky Toy after all. Maybe the whole thing is some sort of elaborate plot meant  to confuse. It's hard to say.


Some mysteries probably won't be solved in our lifetimes and for now we'll count this item and it's slogan among them.

It's mysterious, it's odd, and it's squeaky. We're thrilled to get to share it with you.