It's been awhile since I've done and oddities post, it's not that we have any shortage of weird crap in our vast collection, its just that I've been devoting my time to other pursuits. However this has been sitting on my desktop for months gently reminding me that we have a little gem to share with the world. So today I bring you a Russian Bootleg Sailor Moon Paper Doll.

Here's the front cover which is also the front of the doll, which notably has no perforations or even thick lines for guidance you just have to be really good with a scissors. There's also some Russian text here but we have no idea what it says, my BFF's husband is Russian and I could have asked him to translate, but I unfortunately have a healthy sense of shame and didn't want to ask him to look at and translate this ridiculous thing. So for the time being it's a wonderful mystery and we can just pretend it says anything we want until someone corrects us. I'm content to think it says Katarina: Moon Sailor. So naturally the artist took some creative liberties with the Sailor Moon character design, shortening up her hair, giving her a blow up doll mouth and breaking the fingers in her right hand. I'd complain about her body proportions being seriously questionable, but I love Naoko Takeuchi's manga art and none of it would past and anatomy test so, I'll give that a pass as it's in the spirit of the original. Also as I noted in the caption there's a stained glass dolphin on it for no reason, I suppose it could the company logo, though if I made this item I'm pretty sure I'd take great pains NOT to brand it in any way, but to each their own.

Moving on, here's the back.


Unlike just about every other paper doll I've seen the back of the doll is on a totally separate sheet front he front of the doll. It also has no perforations or helpful outlines so you have to hope you manage to cut both parts out perfectly so you can stick them together. In addition to the back of the doll there are the strips used to stand her up which the maker has thankfully included some dotted fold lines on them and a little diagram. So even if you mangle the doll itself trying to cut her out, you know how to make her dismembered body stand up straight. There's also a lot of Russian text back here which we're guessing is mostly assembly instructions and looks to be some company contact information just in case you want to order more poorly executed paper dolls for friends and loved ones.

Naturally you don't want Katarina the Moon Sailor standing around in her bra and panties all day so she comes with several pages of outfits we didn't take pictures of them all just 2 pages worth.

First up some generic  everyday outfits:

This is the standard sort of casual wear this book of paper dolls provides you with, right on the cutting edge of fashion forward looks for dowdy middle aged Russian moon sailors. More so than the lovely clothes themselves, the problem with these is the drop shadow around them. So now there are no perforations and no guidelines and there's a drop shadow around the clothes further confusing the cutting process. Do you leave in the drop shadows or do you cut them off? This paper doll forces you to make hard choices, they kind there's no going back on. More than simple fashion fun this doll set is teaching tough life lessons. If you can bring yourself and your scissors to make a decision on what to do about those oh so helpful drop shadows you can move on to another set of outfits. 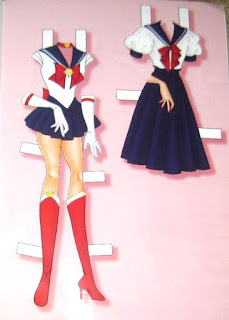 It wouldn't be a Moon Sailor doll without the classic Sailor Moon outfit. This is the one thing the doll actually does well, with the exception of her gloves, it's a fairly accurate representation of Sailor Moon's classic fuku. The School fuku has some accuracy issues but would pass as Usagi's 5th season High School fuku.  The maker apparently put all their time and energy into making a decent looking Sailor fuku that would be nearly impossible to carefully cut out and use with the doll, bless them, truly.

So in conclusion this thing is pretty awful and unusable, what I didn't point out above is that it's all on flimsy paper not cardstock, and not even the thickness of most office paper, so even if you happen to be one of those people who do really beautiful and delicate cut work your doll isn't going to stand up under it's own weight and will likely blow away if someone walks by it. However like all of the crszy pieces in our lovingly curated collection we like it for all of it's insane imperfections. When you spend thousands of dollars on your collection sometimes it's nice to throw a few dollars at something that's not so serious and just makes you laugh at the sheer absurdity of it.

Posted by Avane at 3:52 PM No comments: Links to this post