A little Silent Hill with your Sims 3?

Just a few days ago I was Browsing gaiaonline because I'm a grown woman who still likes to play dress-up (which is a lot less inappropriate than it sounds) and they are running a promotion for the Sims 3 ambitions expansions complete with big banner ads. So  I spotted this one.

Well not actually this one, I forgot to screen shot the entirety of the Gaia one before it was changed with something else. But an ad strikingly similar to this one nevertheless. So can you spot the insidious influence of that quiet little resort town?


How about now? (this one was taken from the original banner I saw which prompted this entry)

Doesn't this young Sims Doctor holding a disturbingly large injection bare a striking resemblance to a Certain Silent Hill physician? A Certain evil, pretty much half responsible for bringing about the torture of  a young girl, the birth of an impure god and twisted "nightmarish delusions come to life" doctor? A Certain Dr. Michael Kaufman? 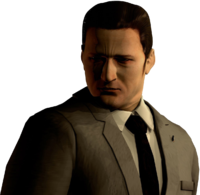 Here's our good friend Dr. K as he was shown in the first Silent Hill game if you don't recall.  So what's Dr. Kaufman doing running around the Sims' Sunset Valley? Dealing White Claudia? Starting new cults? Just generally being a sleazeball? What? Given that it's the Sims I'm sure you could honestly make him do whatever the heck you wanted.


I have to admit though that looking at more pictures of the promotional Doctor, he looks less like Kaufman and more like a generic doctor (who also happens to be black which Kaufman clearly is not). But I still think it could just be clever disguise and real Dr. Kaufman could be the catalyst  for any untold manner of horror in your Sim town. Though if you just stash some Aglaophotis somewhere in the Sim house and keep those pesky robbers away from it, you should avoid any unwanted demonic possessions or god birthing.

~Stephanie
Posted by Avane at 3:58 PM No comments: Links to this post

I have to start of by saying I love Burgertime. It's one of those games that you can't fathom why anyone would come up with, let alone actually make it and successfully sell it. Just in case you've lived under a rock since the eighties, the concept is this: You're a chef who exclusively makes giant burgers. Burgers so giant that they can only be assembled by placing the pieces including: lettuce, cheese, tomatoes and buns, on a large scaffolding, and must be walked on, (presumably by special sanitary chef shoes) to make them drop. While being chased by sentient wieners, eggs, cheese, and bread sticks. Now you might be wondering how on earth that could be fun and possibly where the heck tomatoes and lettuce that big could be grown. But, it's one of those things it's best to just accept. A game about a plumber in a parallel universe doesn't sound fun either but we all know it is. However, sometimes a port to a different console goes horribly awry sucking all the good out of an otherwise fantastic game and unfortunately that's what we're about to see here.

Controls are very simple, you use the joystick to move around, and the button to toss pepper. Unfortunately they're extremely sluggish and unresponsive. The ladders are especially terrible and it's very easy to get stuck getting on and off of them.  And the simple act of using the pepper freezes the entire game for a little while. 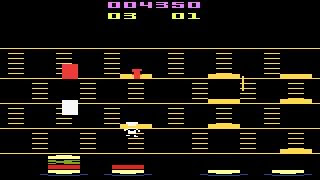 Graphics are terrible, even by Atari standards.  Peter (your chef) is the only thing that looks remotely like what he's supposed to be. The wiener/sausage is strangely shaped blob, the eggs and cheese are simply flickering squares and the breadstick is just a colored line. When the power-ups show up on the screen they're pretty indistinguishable (the coffee is the closest to looking like a real item) and cause all the sprites on the screen the flicker terribly.

Soundwise, it's surprisingly good. It's a pretty solid rendition of the original arcade music. It's not perfect, but it's pretty good. The other sounds are pretty good as well. The burger ingredients make a pretty satisfying thud when they hit the bottom.

Generally you start off an Atari game by choosing your difficulty. This one doesn't have difficulty options, if you play with the difficulty selector you just choose more players. Next up you'd normally have to push start, not here though. Why bother kids with a pesky title screen or even the classic Atari staionary first screen, just instant action, so you better hope you're ready.

So you've turned on the game and have prepared yourself to hit the ground running for some fast paced Burgertime action! YEAH! *fist pump* Well..not so much. In reality this is the slowest game of Burgertime you'll ever play. Your chef moves at the speed of an extremely depressed snail, and the horrendously animated food enemies move just tiny bit slower. So you walk slowly from ingredient to ingredient, knocking them from one level to the next. However, you have to be careful otherwise you can get caught by a flickering cube (the egg or cheese), a bouncing line (a breadstick) or perhaps even an indistinct blob(the sausage)! Luckily even if you found yourself trapped behind a dubious looking square, there's always the pepper which
traditionally freezes enemies for a few seconds. allowing you to get away. The  pepper is a
little different  this time around. In order to use this  "pepper" you have to be directly facing an enemy who's practically on top of you. Simple in theory, crappy in practice.  Making matters worse, it's apparently super pepper, as in addition to freezing the baddies it freezes the entire game for a few seconds...rendering just a little better than useless. But hey, at least you can get more of it by "rushing" to the second tier down and grabbing some random collection of pixels that's supposed to represent ice cream, french fries or coffee. 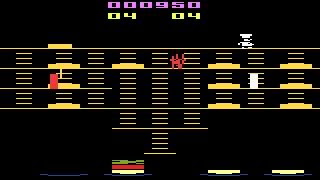 So if you can make you way past bad graphics, sluggish controls and poor execution in the first level you're rewarded with four more levels of the same thing. When you finish up the fifth level, normally you'd expect a frozen screen, a points countdown or some of those cool seizure inducing Atari graphics we've all come to know and love. Sadly there is none of that to be had in this Burgertime, instead the game simply restarts from level one. 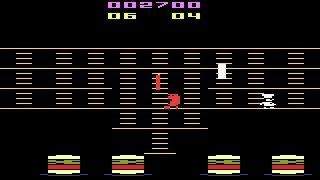 This version of Burgertime is playable, and by playable I mean it has the barest elements of a video game. It's honestly the worst port of any game I've every played. You can suffer through it if you feel really determined to see all five levels. It's better than playing the ET game, but not by much. Really it's not even something you can accuse of being a product of the fabled problems of arcade to home porting as the Intellevision version is great. This is just some lazy programmer's plague upon Atari owners.

Don't forget to stop by our shop for retro gaming collectibles:

Posted by Avane at 10:46 PM No comments: Links to this post