I loved Daria when I was in high school and watched it religiously. When I got the DVD sets a few years back for my birthday, I was thrilled and commenced to do some hardcore Daria watching. This totally rekindled my love for the series and I found myself googling Daria in the vain hopes there might be something more I could be finding, watching or otherwise being entertained with. In my searches I found that there was a PC game that came out in 2000, and as a gamer and fangirl I knew I needed to get it asap. It took me awhile to track it down, but here are the fruits of my fangirling.

Introduction
Oh Joy, Oh Rapture a completely unimportant and self indulgent review of a game no one will care about.

The Concept of Daria's Inferno is a  retelling of Dante's Inferno taking place in Daria's twisted nightmare version of  Lawndale. 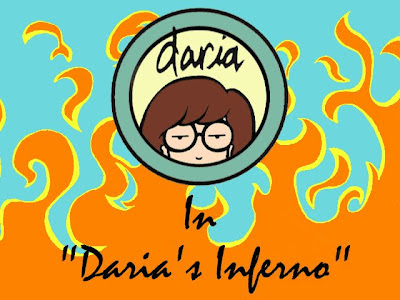 Oh Joy there's more to read after the jump, I'm so happy I could cry.

Let me start off by saying this is NOT an official Legend of Zelda item. It is in no way associated with Nintendo or any other company that owns a license for making Nintendo products. Normally we do not support companies or individuals who deal in "unofficial" merchandise, but occasionally we see something that's completely unlike anything available officially (often for good reason, see the Sailor Moon Car Pencil Box) and we add it to our collection.

That in mind we bring you the Crossbow Training Crossbow.

Now with the above "this is a filthy dirty nasty bootleg" disclaimer in mind, you do have to give this a bit of credit. It doesn't actually have the audacity to claim it's in any way associated with the legend of Zelda franchise. It just happens to have a blonde elf like young man in a green suit on the package, who just happens to be posed similarly on the official product. Most of us have probably encountered someone's Original Character creation who looks surprisingly similar but absolutely IS NOT LINK. (Kind of like how this character absolutely NOT Vincent Valentine from FFVII) It could also just happen to use the same lettering as the official release of Link's Crossbow Training on the Wii. So it's possible that the link between this item and the Legend of Zelda franchise is all our heads...but probably not. Regardless it's time to take it out of package.


So here it is in all it's glory along. Though I forgot to take a shot of it with it's "quiver" of arrows, but there's not a lot to see there, it's a piece of plastic that holds plastic arrows yay! There was some assembly required, but it mostly consisted of turning the bow part sideways and sticking it onto the gun part. There was also a piece to help keep the bow straight on the gun, but I broke mine trying it put it in. It didn't seem to effect the performance at all though.

It's made of super lightweight cheap plastic with a weathered bronze metallic finish. It has surprisingly detailed and attractive molded designs all over it. Though as a point for the "this is an original creation, completely unlike Zelda." argument, the designs look like some sort of low brow steam punk knock off rather than the Crossbow link actually uses in the game:


Functionally speaking it works, but it's not great. First to set an arrow you have to hold the trigger pull back the bowstring and the release the trigger while you're holding the string back to lock it into place once you've done that you can slide the arrow in, just make sure it's completely in it's proper groove or it will split the bottom and top pieces of the gun, like you'd expect with any quality piece of craftsmanship such as this. Once you've carefully set the arrow, you have to hope that all that nonsense about arrows being useless at point blank range is completely fabricated because you have about a 5 foot range and even then it flies pretty slowly, so you'd probably have trouble taking out anything stronger than a Keese made of paper. On that note, for a crossbow "training" toy, it's conspicuously devoid of targets or other training aids, so you probably will be making those paper Keese. Or you could always shoot at your friends and loved ones provided you aim away from the face and they're willing to stand approximately 5 feet away from you.


Overall, it's an interesting oddity, but once it's out of the package it has zero identifiable connection to the Zelda franchise or link. Leaving you with a so/so cheap plastic toy. These have been floating around eBay lately for cheap, so if you're enchanted by the novelty of a Zelda bootleg that's not just a crappy rehash of an official item, get one. For most collector's though, it's not going to be worth the space it takes up on your shelf.