I am a long term Nintendo fan girl.This means that from the age of 5 onward, when anything Nintendo related has graced the television I've taken special notice. As such, I'm very familiar with several decades of Nintendo commercials that aired in the US. (not that I haven't taken a few spins a few around youtube and seen quite a few international versions as well) In light of that I feel pretty qualified to present  this list of the top ten Nintendo commercials aired in the USA:

Normally I'd say this commercial was kind of stupid (not to mention pretty inappropriate), but the ridiculous imagery, joke ending, and brief animated appearance of Dr. Mario himself made it pretty memorable.

This is the only commercial on this list for a game not on a Nintendo console, but it is a Nintendo game and there weren't Nintendo consoles at the time. It's really quite something. From the poor Mario intimation (though his constant calling for Mario tells us it's probably not supposed to be Mario) to the "special" effects creatures, it seems like an early test run of the Super Mario Brothers Super Show with similar stupidly hilarious results.

I really dislike most of the voice over in this commercial, BUT I love the various faces of Kirby. What's not to love about Cowboy Kirby and Curly mustache Kirby? In fact while I'm  thinking about it, Dear Nintendo: I respectfully request you give Kirby a Curly mustache, fencing ability and a Cowboy thug toss ability in the next game.

See the rest of the list after the jump.

Read more »
Posted by Avane at 4:32 PM No comments: Links to this post

Everyone likes a few good Bishounen now and then or sometimes you might like a nice couple dozen of them. We're trying to hit the middle ground by doing a top 10.  Because we're much more familiar with older shows we decided to do vintage anime to make our lives easier. Not that looking for pretty characters is ever truly difficult. For our purposes vintage means anime produced before the year 2000.

Hotohori is so pretty that one plot involves him being successfully disguised as a woman and when the seemingly heterosexual man who'd fallen in love with him as a girl finds out he's really a man, he doesn't care a bit and mentions that he's so beautiful that it doesn't matter.  His waist length hair and golden brown eyes are enough to make anyone swoon. The fact that he is an emperor and a gifted warrior doesn't hurt either.

I watched Gundam Wing almost entirely for Zechs. I like a space opera and giant mech battles as much as the next person, but all of that was secondary to the beautiful blonde ace. Much like Larva he spends entirely too much time hiding his face behind a mask, but he's so pretty it's worth the wait. Of course the fact that he's a pretty well written and fairly complex character does lend a hand in helping you get over those agonizing hours of Gundam where he's masked. He's basically a more feminine version of Char Anznable, but Char is pretty sexy too so that's not such a bad thing.


8. Mephisto from Demon City Shinkjuku
In the competition for the title of prettiest male anime character, sometimes good parentage is really in your favour. Such is the case with Mephisto, he was spawned by anime royalty. Written as a character by Hideyuki Kikuchi (of vampire Hunter D fame) and drawn into existence by Yoshiaki Kawijiri (who's the head of Madhouse studios and done a lot of the best looking anime in the world, but probably best known for Ninja Scroll). With a pedigree like that Mephisto was destined to be beautiful and does not disappoint, his pale skin contrasts against his dark hair and dark eyes fringed with thick lashes. Like any good gothic styled character, he's feminine enough to be called pretty and masculine enough that you'd not mistake him for a girl.

Bancoran is accurately nicknamed the Bishounen Killer, if I were a beautiful young man I'd be powerless to resist him. I mean who wouldn't love a man who can so successfully rock blue eyeshadow and wears such snappy suits? In addition to being lovely to look at Bancoran is a secret agent with a very sexy voice and statistically improbable perfect aim.

There's something so appealing about someone who's a florist by day and an assassin by night and in that way all the characters from Weiss (except maybe Omi) have their own sexiness. Arguably though the prettiest is Aya. He's got the best outfit, sports a sassy asymmetrical hair cut on his lovely red locks, and often is giving a sexy steely stare with his beautiful violet eyes. If that's not enough he also drives a Porsche and wields a Katana. If you're the kind of person who's into brooding bad boys, he's irresistible.

5. Tsunami from Twilight of the Dark Master

Tsunami is beautiful in that strange other worldly way that would never work in real life. A man with long white hair, red lips, a black trench coat, and a soft spot for Japanese demon masks would certainly get a few looks, but probably not adoring ones. As an anime character he fares a little better but it's hardly surprising that when we bought a cel of him, he was mislabeled as a "beautiful woman." Gender bending aside no matter how you slice it, he's gorgeous. His soft spoken nature and an ability to wield tremendous amounts of supernatural power certainly don't hurt either.

Larva is a terrible tease. He spends most of his time hiding his pretty face under a mysterious mask. In fact in the OVA he never takes it off! In the TV series he does get to remove it and reveals knee-weakingly beautiful visage. His lovely periwinkle blue locks fall across his face in lovely accent to his piercing red eyes. In addition to looking pretty, Larva is a powerful demon with god like powers and a keen sense of loyalty or in other words, classically swoon worthy.


D was my first anime crush. I saw the original anime back when the SciFi channel was still spelled correctly and showed anime once a year. I was immediately smitten with the dark and mysterious vampire hunter. He was originally brought to life by the incomparable combination of Hideyuki Kikuchi and Yoshitaka Amano, so like Mephisto he was destined to be Amazing. In addition to his perfect pedigree, D appeals to me on a number of levels but his inclusion on this list largely deals with his long flowing hair, his sexy voice and just the inherent sexiness of being a half vampire.


I'm kind of cheating here by putting two characters together, but these two Ohtori boys are lifelong rivals and constantly comparing and contrasting each other. Touga's greatest appeal is probably that he's voiced by Takehito Koyasu who voices  several characters appearing on this list for good reason. But if the voice alone isn't enough to make you melt he's got a a curtain of beautiful red hair with a fetching highlight, rich inviting blue eyes and a penchant for taking off his shirt. He's cocky and confident that makes him both an asshole playboy and irresistible. Like Touga, Saionji is extremely egotistical, but unlike Touga it's not the result of boundless confidence. His attitude is the result of seemingly boundless insecurity. This insecurity doesn't really make you pity him though as it often leads to his unspeakably cruel and disgusting behavior which makes him pretty darn deplorable most of the time. However his flowing green mane, soft violet eyes and similar propensity for shirtlessness smooths that over the evil a little bit when he's practicing Kendo or some other sexy activity that doesn't involve domestic violence. But,  I mean  there's no getting around the fact that Saionji is a dirtbag, but he's a very pretty dirtbag.

1. Iason Mink from Ai No Kusabi 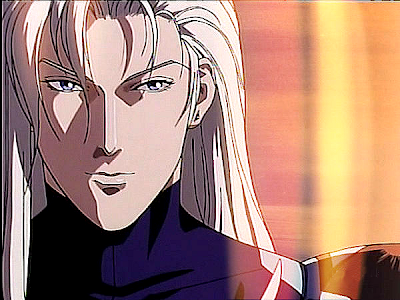 Naturally the characters in Shounen-Ai are going to be a whole gaggle of pretty boys. Ai no Kusabi is no different and there isn't a single unattractive boy to be seen. Iason is perhaps the best of the best though, remarkably beautiful even in a sea of beauty. Iason isn't the most lovable guy, in fact he's pretty easy to hate but his shiny flowing hair, ice blue eyes and deep commanding voice make it hard to take your eyes off of him. Iason nabs the top spot not because he's our favorite character on the list, but because the vast majority of Iason's character is tied to his beauty. Iason wields the power he does and gets the advantages he does because he's the most beautiful and while it's pretty despicable, it does embody the pretty-boy spirit in the purest way.


So there they are the cream of the crop as far as the sort of what vintage anime has to offer you in terms of objectifying beautiful men. It was a a difficult choice but these beauties managed to come out on top.

Iwould be remiss though in not adding our list of honorable mentions:

Those boys are almost as pretty as their listed brethren so be sure to give them a peek if there are any you haven't seen before.

Obviously this list is very subjective, and honestly if you asked a few months from now some of the choices and placements would change. One thing is for certain though, there's enough eye candy here to satisfy any Bishounen lover.


Don't forget to stop by www.avaneshop.com for vintage anime collectibles:

Posted by Avane at 5:31 PM No comments: Links to this post