We haven't done a collection update in awhile basically because we've been so busy with other things we've hardly had time to focus on curating our own collection.  We're still a little time short so this is a single item update, but it's a good one.

A promo poster for the English release of the Revolutionary Girl Utena anime Signed by both  Chiho Saito & Kunihio Ikuhara ( the creator of the show and director of the anime if you don't know) at Animazement in 2000. Utena is Jen's favorite series after Sailor Moon, so it's a pretty exciting  item for her. We've actually had it for about a year, but a local frame sale inspired us to take it out of the closet and frame it. 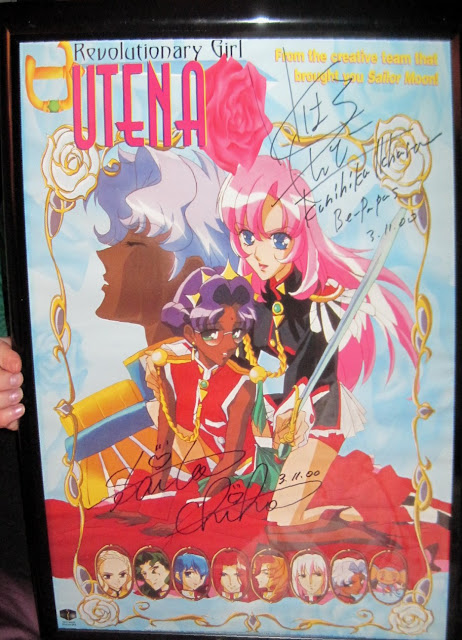 We haven't hung it up yet, but soon it will be sharing wall space with this Furoku poster from Newtype 1997. Both will be hanging in our stock room/office, which due to the rarity of most Utena merchandise, contains a tiny tiny amount of Utena stuff for sale. Given the aforementioned lack of readily available Utena merch we're really happy to have such a unique piece in our collection.

Posted by Avane at 3:23 PM No comments: Links to this post

Last night we lost an auction for quite possibly the oddest Sailor Moon bootleg ever. Now granted there's a whole host of crack Sailor Moon Items both official like this vanity, and not so official, like this crazy pencil box. But this thing really goes a step beyond: 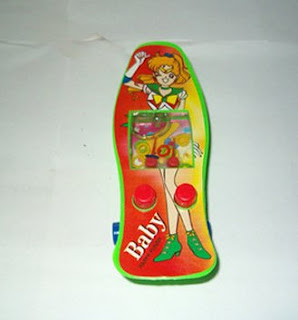 Judging by the seller's description and the photo, it's apparently a skateboard with water game embedded in a color confused Sailor Jupiter's stomach with "Baby" thrown on it for extra flair...

Just think about the many facets of that for a second. First someone had to think up the concept of a water game skateboard, and then decide to put  a knock of Sailor Senshi on it. How/when/why does that come up? Worse yet how to someone else then decide it's not only a perfectly reasonable idea but a perfectly reasonable idea that they should utilize factory equipment to produce?  It boggles the mind.

Normally this is just the sort of insanely stupid poorly thought out item that would we love to add to our collection, but as I noted before we lost it. We're a bit sad about that it's true, especially as we've never seen another, but it ended at $13.50 before shipping which is approximately $13 more than it's worth. While it would have had a place of pride among our other oddities, I think paying that much for such a clearly awful item, would have left us feeling a bit ashamed of ourselves so it's probably for the best. We hope the auction winner appreciates all it's oddness and awfulness and likes it as much as we would of.