Happy Thanksgiving! And a coupon code

Here in the US it's Thanksgiving. It is a great time to really reflect on what your thankful for be it your friends, your family, the new Sailor Moon anime coming out next year, or just getting some new action figures. We hope you have something in the past year to really can feel happy with or proud of. Even if you don't celebrate thanksgiving, we've got another reason for you to be thankful, our Black Friday/Cyber Monday Coupon !

Additionally anyone who makes an order of any amount between now and Tuesday the 27th will be entered into a drawing for $10 giftcard to the shop! So if you've had your eye on anything now's the time to buy!


As usual we've updated lots of new stuff and restocked some old stuff over the last month. We're also super stocking the store for the Holiday season we're adding and restocking dozens of new items per day!  So
stop by our shop and snag yourself a good deal!

Today's crazy Sailor Moon item is straight from Japan, once again proving that it wasn't just Irwin or Chinese bootleggers who had insane ideas about what items do and do not make reasonable Sailor Moon toys and collectibles. With that in mind we present you Sailor Vacation:

It's kind of confusing as to what exactly Sailor vaction is for, is it for taking on vacation with you? (it's not visible in our pictures but there is a litte plastic handle on top). Is it what the scouts would take on vacation with them? Is it supposed to give you the feeling of going on a a "Sailor vacation" without leaving your room? Honesty we have no idea, and the box doesn't seem that helpful.Admittedly as usual we have very limited grasp of Japanese, so we don't have any idea what the box says, but it looks like generic warnings and a parts list mostly. All we can really tell is that it's a box of stuff with eternal Sailor Moon and chibimoon getting a lot of face time. 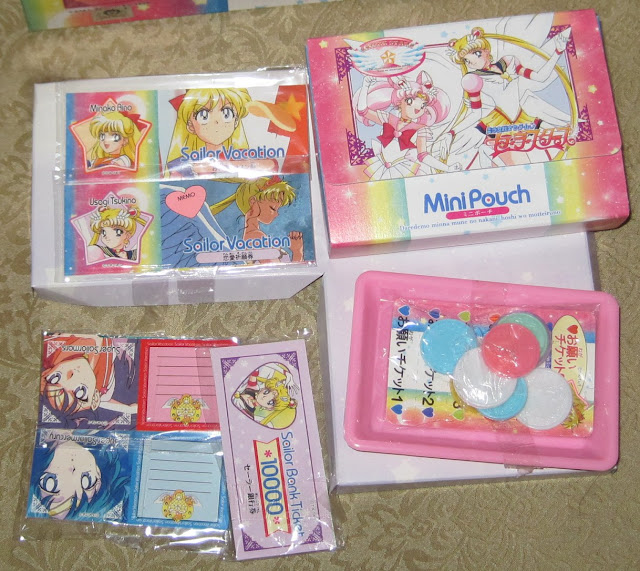 For your vacation you need a plastic tray with plastic coins and some Sailor bank tickets, which is just more fake money but in a paper pad form this time. These are the items that  actually make sense you would need money on vacation. What's less sensible is why you would need 4 different memo pads, a cardboard "pouch" (which is just a cardboard box with a flap and plastic handle) and an (unpictured) plastic whistle. I suppose there could be some sort of game using these items, but it;s pretty unclear and there isn't really a whole lot of items with text on them in the box leading me to believe that if it is a game you've got to make up your own rules.
Also unclear is why poor Sailor Jupiter was excluded from the Memo pads even though the other inner senshi are accounted for. Perhaps she decided to skip the Sailor Vacation and went someplace more fun?

Quirky, unclear usage, questionable design motives and plastered with Sailor Moon characters, just the sort of thing we love adding to our collection.