Just about everyone interested in adventure games has played at least one game in the King's Quest series. The plights and perils of Daventry's royal families delighted gamers for about14 years, unfortunately like many venerable long running series, eventually quality declined, such is the case with Kings Quest VII. 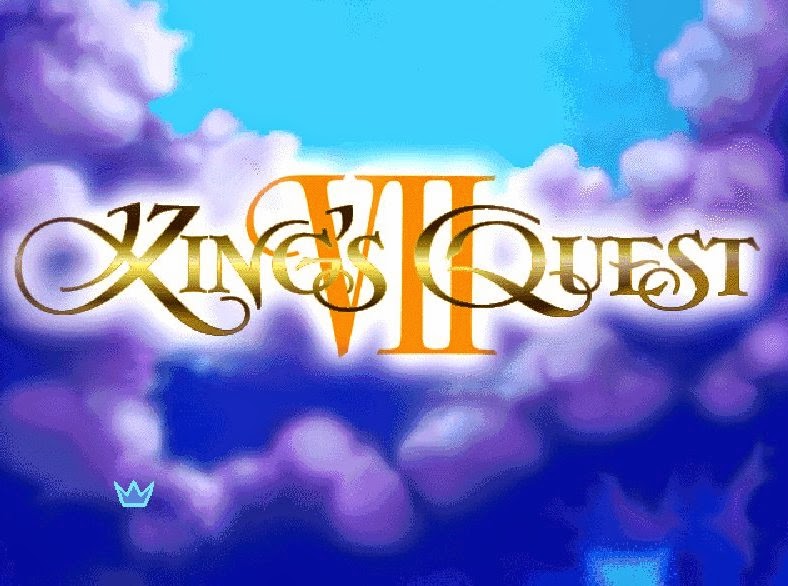 The Story for this King's Quest entry is centered around Queen Valanice looking for her daughter, Princess Rosella (Star of King's Quest IV) after a not so well received talk about marriage ends up with  both of them going into a pond and getting sucked in the magical world of Eldritch. Now sometimes the premise is silly but the rest of the story manages to be engaging and interesting, that's not the case here. It evolves into a convoluted drama involving a Witch who's angry with you for reasons that are never entirely clear and Rosella's gaining true love. It starts silly and not particularly interesting and stays that way 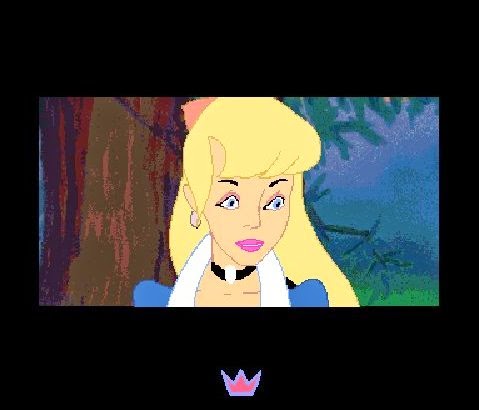 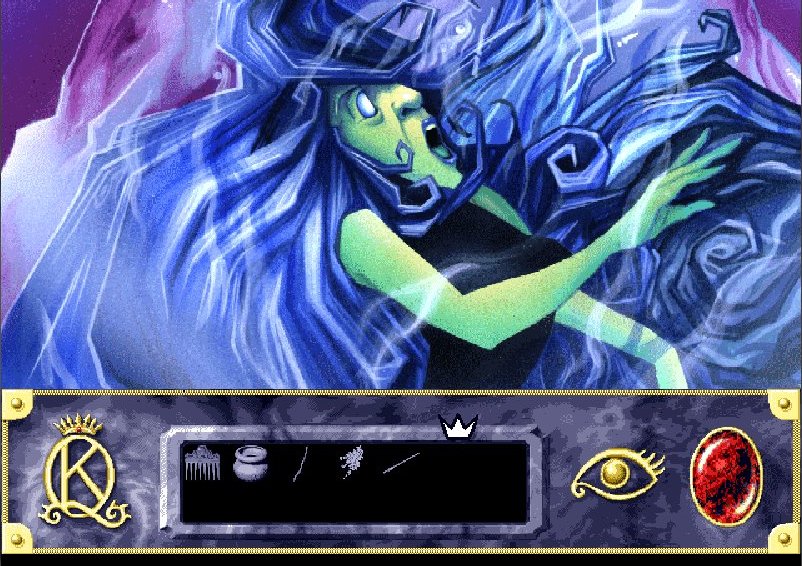 Graphics:
Graphics in the cut scenes are done to look like cel shaded animation in the style cartoons from the time period. The cut scene graphics are not great by current standards, but not bad either, serviceable overall. The on-screen graphics use the same animation style for the most part, but it's hit and miss in terms of how good it looks. Most of the background characters and enemies are done about as well as the cut scenes, but Rosella  and Valanice often look terrible in motion and don't interact particularly well in their environments.


Controls:
This is the only King's Quest that is a pure point and click, no typing or keyboard necessary. You use your mouse to investigate, navigate and use your inventory. Additionally, making it simpler than earlier incarnations your pointer is a magic wand that sparkles whenever you're near something that you can interact with. Overall basically what you'd expect when playing a point and click adventure game.

There's nothing to write home about in the sounds department, the ambient and action sounds go well with cartoony vibe of the game. The music is so-so, not bad, not good, very forgettable, but in keeping with the game. The only exception being the main theme/ending theme which is some and irritating pop song that sounds like it belongs in a barbie movie. It's fully voice acted game, something worth noting back in 1994, and the voice acting is surprisingly good given game voice acting was still in it's infancy. That being said by today's standards most of it isn't good, like most of the game though it ends up solidly mediocre. 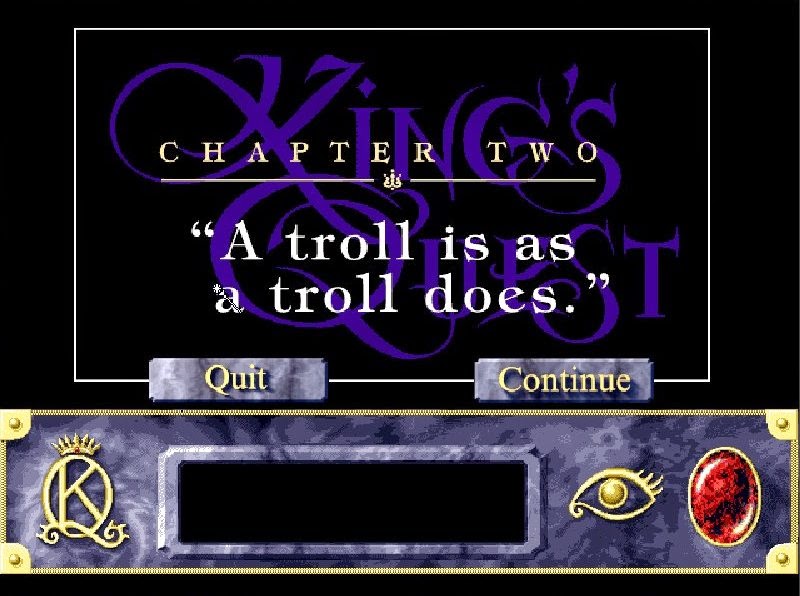 King's Quest VII's gameplay differs from the earlier entries in variety of ways. First as I briefly touched on in the controls section, there's no text interface at all, it's purely point and click. Second as I also touched on, the point and click cursor is a magic wand that twinkles whenever you're near something of note. Third you take controls of two different characters, in alternating "chapters".


There are six chapters where you take control of either Rosella or Valanice. At first each character is in different areas from one another,  that span the 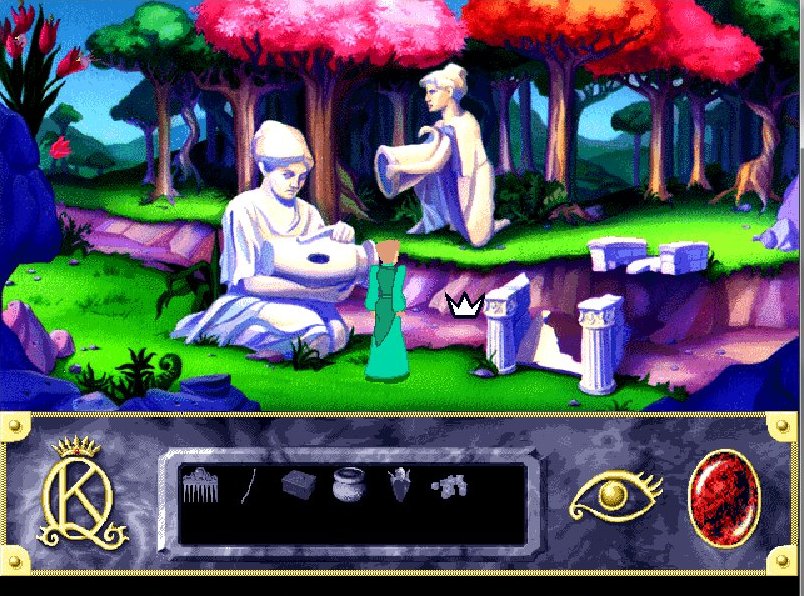 breadth of Eldritch ranging from a volcanic cave, to fairytale town, to a knock off  Halloweentown. Eventually though they cross paths (though without actually meeting each other) so you get to see all these areas from the perspective of both of the royal ladies of Daventry. Aside from being cliched these environments are actually pretty well executed, they're bright, colorful and interesting. Sometimes the attention to detail can actually make it hard to find what you're supposed to interact with but the environments are a place where the game really does things well.

Of course what's a good environment without a few interesting inhabitants.The NPCs in these areas 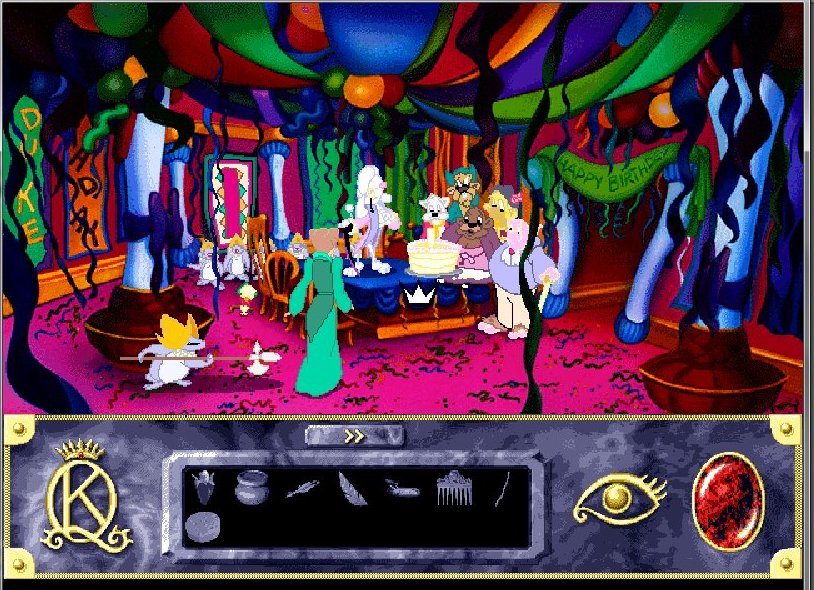 self-segregate because you pretty much only encounter characters who fit the aesthetic of their respective towns. This is not the only game that does this by a long shot, but it's boring and predictable. that being said, there still are a few interesting denziens of Eldritch: there's foppish dog Arch Duke Yip Yap who's governing style seems to hinge on making sweeping generalizations, throwing parties and wearing masks, a talking bolder who spends most of his time sleeping, a troll blacksmith who's clearly got a sexual harassment suit on his hands and a surprisingly pleasant and helpful headless horseman. Although naturally not all of these inhabitants are particularly nice, several of them are more than happy to bring your quest to a premature end. 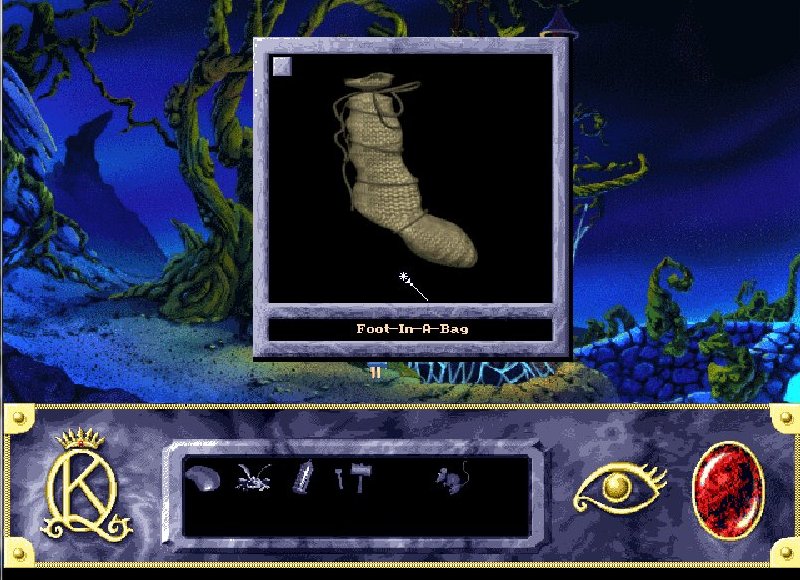 you're going to have to do some item collection and puzzle solving. The magic wand pointer makes the collection parts fairly easy. Making things a bit more interesting, once you've collected the items you will need to examine them, most of them time it's just seeing what it looks like from different angles but occasionally it's necessary to continue with the game. Unfortunately this feature wasn't implemented particularly well so it gets irritating more often than not,  because it's not always easy to spot where to interact with a given item. Still, most of the puzzles aren't particularly difficult. The biggest puzzle problems come from some poorly executed backgrounds which even with the help of the sparkly pointer can be difficult to navigate. That being said there were a few puzzles we had to look to walk-through for, mostly due to some pretty illogical conclusions, *almost a spoiler alert* that's just not how you use a rubber chicken.

Getting from world, to world, puzzle to puzzle is pretty linear. The swapping perspectives guarantees a lot of backtracking as the characters visit a lot of the same areas, though not at the same time, Valanice and Rosella don't actually meet up until the very end of the game. There isn't a whole heck of a lot of back tracking while you're the same character though, just a few minor instances of it. This has bad and good parts, you know that for the most part assuming you diligently picked up the items in a given area you're not going to have to wander back there 100 times seeing if there's a new item to be found, on the other hand you're it makes the game more linear and less interesting.

Your reward for traversing these diverse lands, clicking and puzzle solving your way to victory of the evil witch is either a good ending or a bad ending depending on how you handle the last scene. The bad ending isn't really all that bad, it just doesn't really answer any questions for you. The good ending is a little better, giving you an ending that really only makes sense if you've played King's Quest IV, and a full animated ending sequences of cliches set to some really uninspiring pop music. In short, regardless of which ending you get, it's not worth the time put into getting it. 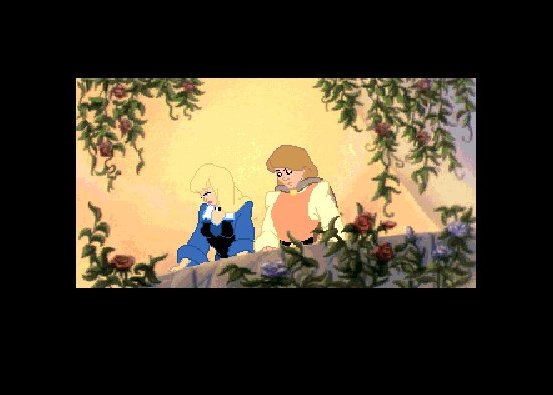 Overall this is a mediocre title, it's playable if you like adventure games. It started off fun but it got repetitive and boring pretty quickly. Frankly it was a bit of a struggle to even finish it. Honestly while it's not bad I couldn't really recommend it unless you're a die hard King's Quest fan. I give it 2.5 cephalapoints.